Called the “Bimare” because it is surrounded by two wonderfull bays, Sestri Levante has inspired poets and writers of all ages.

To the West there is the “Baia delle Favole” to which the fairy tale author Hans Cristian Andersen gave his name; in fact, he stayed there in 1833 and the homonymous Prize for Literature for children was dedicated to him. The review of the “Andersen Prize” every year invades the city streets between May and June.

On the opposite side you can see the “Baia del Silenzio” with its beach framed by pastel colored houses which is one of the most suggestive corners of the town.

Between the two inlets rise the Palazzo Durazzo-Pallavicini, municipal seat, the pronaos of the Basilica of Santa Maria di Nazareth and towards the promontory are the Oratorio of Santa Caterina and the Church of San Nicolò.

To the East extends the promontory of Punta Manara, behind which stands the town of Riva Trigoso, a hamlet of Sestri, a small fishing village and ax masters, builders of the leudi, the typical sailing boats with which the rivans pushed along the Mediterranean routes for the transport of oil, wine and cheese.

They are formed by the villages of Monterosso, Vernazza, Corniglia, Manarola and Riomaggiore.

The current aspect of the Cinque Terre is the result of the particular geographical conformation and hard work of man, visible in the terrace cultivation and in the numerous dry stone walls.

Cinque Terre are a National Park and a World Heritage Site protected by UNESCO. 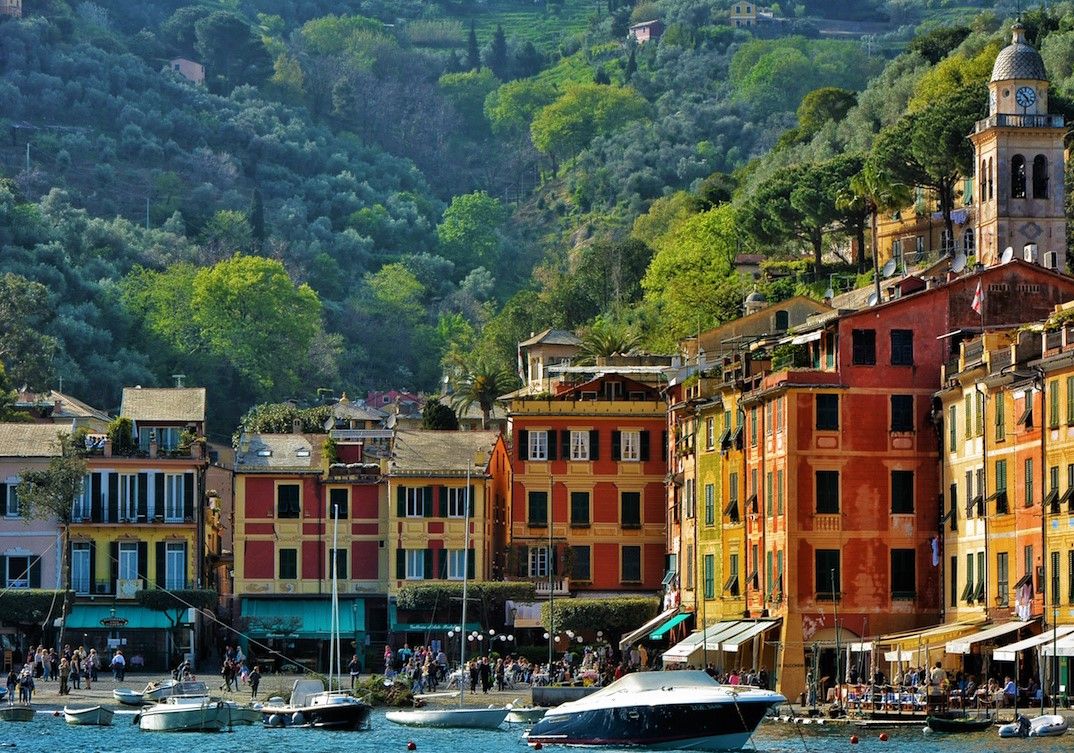 Portofino, with its famous “little square” and with its villas that peek out among the olive trees, represents the meeting point between worldliness and privacy.

It is a small village, located in a small almost inaccessible cove, which has become an internationally renowned name and a symbol of beauty and exclusivity all over the world.

Located in the westernmost part of the Gulf of La Spezia, Portovenere owes its name to a temple erected in honor of Venus Ericina, during the Roman times, built on the promontory of San Pietro. The temple was purchased from Genoa by the Vezzano lords in 1113 and developed as we currently know it with the construction of the castle on a pre-existing fortification, the city walls and the tower houses with typical Ligurian colors.

In front of the village is the archipelago with the three islands, Palmaria, Tino and Tinetto which are part of the Porto Venere Natural Park.

Tino is a military area and is accessible only for the patronal feast of San Venerio, on September 13th.

Palmaria is the most visited and is separated from Portovenere by an arm of the sea called “Le Bocche”.

Near Portovenere stands the small town of Le Grazie which preserves the archaeological site of the Roman Villa of Varignano and the late Gothic Sanctuary of Santa Maria delle Grazie.

Camogli stands in a steep and green natural landscape, in the middle of olive and pine trees, overlooking the Golfo Paradiso.

It is a small village characterized by the presence of colorful fishermen’s boats and it looks like a multicolored sequence of houses climbing the hill; it is known for the famous “Fish Festival” which takes place in the month of May.

Not far away stands the Abbey dedicated to San Fruttuoso of Tarragona, from which it takes its name, bishop and Catalan saint of the third century, whose ashes are preserved there.

San Fruttuoso cannot be reached by any road, but can only be accessed by sea or by taking two panoramic paths: one that descends from the above Monte di Portofino and the other that runs along the coast starting from the bay of Portofino. The Abbey overlooks the bathing beach in front.

In its bay there is the Statue of Cristo degli Abissi, placed in 1954 on the seabed and restored in the nineties. Since 1983 the abbey has been part of the architectural heritage of the Fondo Ambiente Italiano. Periodically there are concerts of classical and light music and other initiatives promoted by FAI.

Metropolitan city overlooking the sea, Genoa is also a city of art that has developed around the port which has always been a place of thriving traffic and commercial exchanges.

Its ancient center is the largest medieval historical center in Europe and is crossed by a dense network of alleys from which you can grasp the multicultural soul of the city.

Walking through the characteristic shops of the center you can see the noble past of the “Superba”, made of sixteenth-century houses and prestigious churches overlooking small squares.

Sestri Levante is not only a seaside town, but it is a good starting point for walking and trekking in the Ligurian Apennines.